It has been a rough winter, no doubt about it.   I’ve had flu, strep, and what now looks like pleurisy.  Every time I got up, another wave knocked me down.  I finally acknowledged that I had to resume my old habit of resting and pacing myself.  It was hard to have to acknowledge that.

I wrote in my journal that having this illness is like being in prison: you are confined, the world passes by without you.  Also, you never know when you will be violated, not by another person, but by some passing virus or bacteria.

Perhaps because that image of prison was on my mind, I found myself reading about Lori Berenson, the American political activist held in Peru for the past fifteen years on trumped of charges of terrorism in the Sunday New York Times Magazine (http://www.nytimes.com/2011/03/06/magazine/06berenson-t.html ).  One of the curious things she talked about was how carefree she was when she thought that her sentence wouldn’t be commuted . At the beginning, many terrorist prisoners, like Berenson, had life sentences. “It was somewhat carefree because you didn’t have any concrete sense of the future,” she told me. In a similar way, when I was sickest with CFIDS,  I also had no future.  There was only the present moment, and it was, in a sense, freeing.  As I got better, one of the hardest things was learning how to cope with a sense of a future, with participating in life.  How to apportion time and energy?  What goals were worth working for?  How to re-enter the stream of life, not as I was before, but in a new way that respected my limits, but also tested them?  These were and are difficult issues.

Another prisoner, Aung San Suu Kyi, recently freed from house arrest, talks almost wistfully about her house arrest.  Now she is exhausted by the demands of political life; then she got up and did her yoga and meditation, and worked in her office.  Then she had a sense of being in control of herself, even if she was not able to be a player in her country’s future.

I am happy to be in the world, even if to do so requires nun-like bouts of rest and saying “no” more often than “yes” to social activities.  I want to forget that I have this illness, but it doesn’t forget me.

Another way having this illness is like a prison sentence is that it feels like punishment.  Like Job, I search and search for the sins that have brought me to this place.  Like Lori Berenson, I feel falsely accused.  Like sufferers of lupus, Multiple Sclerosis, and TB before us, patients with CFIDS are often held responsible for it. 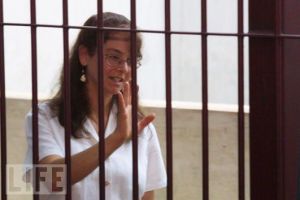 I want to protest my innocence and be acquitted.  But as the DoDo bird said in Alice in Wonderland, “There is no judge, there is no jury.”  There is only the absurd world of this disease.  Made even more absurd and unbearable by the lack of understanding around it.  Today’s Science Times had a very good article about the difficulty of defining Chronic Fatigue Immune Dysfunction Syndrome (http://www.nytimes.com/2011/03/08/health/research/08fatigue.html?ref=science).  After last month’s article in Lancet which maintained that graded exercise and CBT could improve the lives of patients with CFIDS, many people have come up to me to tell me the good news.  Only the fact is, they have no idea of the complex immune, endocrine, and circulatory issues that I have to contend with, no idea of the level of exhaustion even mildly overdoing exercise can cause, no idea of the sensory overload that can catapult me into a relapse.  They have no idea of idea that sitting at the computer in the time it takes to write this post means I’ll  have to rest for an hour.

They have no idea.  Because they have never been to prison.