I awoke this morning to the shrill chiming of starlings, their chirps like knives sharpening–tinny, metallic, clanging.  I imagined their black beaks open, their tongues ululating in unison.  A siren started up, shrill too, gathering momentum, then faded.  The starlings  stopped suddenly then, as if a conductor had lowered a baton. The alarms ceased.  What followed was a luxurious quiet, peaceful and contented, pierced finally by the plaintive song of a single cardinal.

Last night, my daughter said on the phone that she felt like a “bad friend” when she didn’t post on someone’s Facebook page.  Two dear friends of hers have died tragically in the last four years, and “everyone” on their birthdays, posts about them.  She feels these losses deeply, but doesn’t always have words to express them.  “I prefer one-to-one communication,”  she said, and then, “time goes so quickly–I can’t believe how quickly it passes.”  It only gets worse, I told her.

I wonder about the need to be always on, always producing, always engaging, always communicating.  As I watch the hostas turn yellow and curl inward, the King Solomon’s seal return to the ground,  the oak leaves and acorns littering the ground, I think about how important it is to mark seasons, to know what season we are in our lives.  There are rhythms to our lives, times of engaging and times of retreating.  If  you are an artist of any sort, you have to respect those rhythms.  I think especially you have to respect fallow time, the dissolution of what worked and the openness to something new. Yet the culture at large has only one season, summer, and only one age, youth.  So there is always pressure to be on, to be producing, to be posting on Facebook, to be shrilly tweeting away.

I wonder how all our gadgets for communicating make that communication somehow thin and meaningless.  I think of letters I’ve saved over the years and still read, how I’ve labored over letters to send, feeling the importance of trying to frame the communication just so.  We don’t have time to experience our lives if we are always rushing to represent them, do we?  The sort of mass communication we’ve grown used to can also be a trap–we are curating our image, advertising it, not truly communicating.  Don’t get me wrong, I use all these things too; I just don’t want to be used by them.  I want to be clear about what is what.

It was interesting to read the poet Jack Gilbert’s obit in today’s New York Times  for these very reasons.  In today’s celebrity-driven world, here was a poet who eschewed publicity.  In 1962, for six months, he was famous, and this is what he had to say about it:

“I enjoyed those six months of being famous,” he recalled in the Paris Review interview. “Fame is a lot of fun, but it’s not interesting. I loved being noticed and praised, even the banquets. But they didn’t have anything that I wanted. After about six months, I found it boring. There were so many things to do, to live. I didn’t want to be praised all the time — I liked the idea, but I didn’t invest much in it.”

Here is a poem from the obit, “Brief for the Defence.”

are not starving someplace, they are starving

somewhere else. With flies in their nostrils.

But we enjoy our lives because that’s what God wants.

Otherwise the mornings before summer dawn would not

be made so fine. The Bengal tiger would not

be fashioned so miraculously well. The poor women

at the fountain are laughing together between

the suffering they have known and the awfulness

in their future, smiling and laughing while somebody

in the village is very sick. There is laughter

every day in the terrible streets of Calcutta,

and the women laugh in the cages of Bombay.

If we deny our happiness, resist our satisfaction,

we lessen the importance of their deprivation.

He may not be to everyone’s taste, but I’m not sure if his singular voice could have achieved what it did in this poem if he’d been looking for twitter followers.

Maybe all of this is just a brief for my defence, for taking time off  to gather energy in like a root vegetable.

By the way, our anthology of writings for and about cancer patients, A Communion of Sorts, is now available as an ebook for iPad or iPod.  http://store.blurb.com/ebooks/333382-a-communion-of-sorts 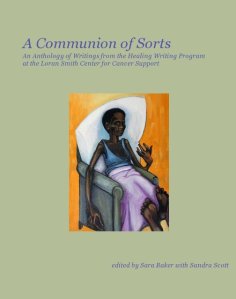 I’ve written before about my involvement with the Karen refugees that my church is helping to settle here.  I backed into this responsibility reluctantly.  I really only got on board because my son, Adam, 14, just loves these kids.  He has a knack with kids and with people from other cultures, maybe because he is such a good communicator and such a warm person.  At any rate,  our family responsibilities include me taking the mother, whom I’ll call Sunny, to the health department every few months to get her Depo shot.  She is thirty and has four boys, 3-11.  She also had a baby girl who died, either in Burma or in the refugee camp in  Thailand–that part of the story isn’t clear.

Sunny’s English is getting better, but is still very minimal.  Working with her I realize how much of language is body language, facial expressions, and idioms.  I often feel that she has much more to say, but is frustrated.  It is frustrating for us both.  But recently, it has gotten better, which I think has to do with simply with the fact that we have spent more time together.  The reason being, Sunny seems to be having heart problems.

The second time we went for the Depo shot,  she complained again–in a soft voice that dropped the consonants–that she had pain in her chest, tiredness, heavy arms and legs, sweating.  I had to urge her on to tell the nurse, and luckily we got a nurse who listened.  We also got a phone translator who eased communications.  The nurse concluded that Sunny couldn’t have her shot until she had seen the GP and been given the OK.

The  doctor was way out in the country.  “Teacher,” Sunny said, her hand on her chest, “Sometime I feel heavy, full.  Sometimes I feel empty.”  There were tears in her eyes.  “My husband say, maybe I’m sad.”  Although Sunny is warm and loving, in her thirty years she has lost a mother at three, lost a father, lost a husband, buried a child, lost a homeland, and a  language.  I believe perhaps her father and or husband may have fought for the Karen  cause.  She tells me, “I never forget them.  I never forget.”  Her siblings are scattered around Burma, Thailand and one in St. Louis.

She tells me that she loves America, that she will never go back.  She tells me that in her village, a quiet village away from  the police, the children all played freely, the mothers doing their chores. One day the police came. “Rattatat, rattatat,” she goes, and then motions with her arms a sweeping motion.   “Mother’s look for babies,” she pantomimes, “go into trees, police get closer, babies cry.”  I stare at her, wondering if she was a child or a mother, wondering if maybe that little daughter didn’t die of natural causes.  “No, she shakes her head,”  I never go back.  “Rice, I carry, walk all day,”  and she pats the top of her head.  “No Piggly Wiggly!”  she makes a joke and we giggle and then she says it again, “Piggly Wiggly.”  I’ve taken her to Piggly Wiggly, and seen the amazed look on her face at all the food, which she buys in bulk to feed those five men of hers.  She shakes her head again, “No Burma. No chicken plant. No DVDs!”  Her second husband, twenty-five, works sometimes seven days a week at the chicken plant, a job you wouldn’t wish on your worst enemy, but for them  it is the key to the kingdom.

We get to the clinic, and there is an hour filling out forms, getting approved for the sliding fee scale.  At first they don’t want to treat her without a translator–they don’t have the phone translator service.  They are about to turn us away, but I convince them that we can communicate “enough.”  It is urgent–she is frightened as it is.  “All right, but you’ll have to see the nurse practitioner.”  Fine, I say.  We wait and wait.  Then we are called in.  The nurse who takes her vitals is lovely and gentle.  She has to wire her for an EKG, and I try to explain to Sunny what is going on.  Sunny is holding her breath in fear.  Her eyes are panicked.  The nurse says, “Tell her it won’t hurt.”  And I do, stroking her forehead.  And it doesn’t hurt, but it is invasive to have your body touched and taped and to be in a prone position, to be totally vulnerable.  It is for me.  It is for anyone, no matter how hard we rationalize it.

We  await and wait again to be seen.  Then a knock and a woman comes in the door.  She has a disapproving frown on her face and a very loud, brusque manner.  “Her EKG is abnormal.  She is not cleared for Depo.  She needs to see a cardiologist.  Any questions?”  We both just stare at her.  That’s it?  I take the records and thank her.  We silently leave.   We get in the car and I tell her she is going to have to see another doctor.  She nods, frowning.  I know that getting her to see a cardiologist will be an uphill battle.  I know that many doctors will just see a small brown asian woman who is a nuisance, a free-loader.  I wonder who will take the time to see or hear her, who will take the time to hear the story her body is telling.