“By yielding, we may obtain victory.” –Ovid

Do you know the term “at sixes and sevens?” That sort of off-center feeling of not quite knowing what to do next, a subtle disorientation? That is how I’ve been feeling lately. My mother is experiencing memory loss, and has been for some time. This was brought home to me in a dramatic way recently, when I saw how confused she was in a large store. I realized that we had turned a corner–we are in deeper waters than I had let myself realize. Things are changing quickly. My role is changing, and this woman who has always been so fiercely independent, is suddenly reliant on me in a way I never expected. It is bittersweet—sweet because she now allows me a kind of intimacy we’ve not had before, and bitter because I don’t want to lose her. As a friend of mine says, “life is a series of not-totally unexpected blows.”  Nothing about this is unexpected, but facing into the lived reality feels vertiginous.

Not long after our trip, I went to Earth Fare. I did a few errands and sat down to gather myself together and write a to-do list. It was pleasant to be in the neighborhood store, and I felt less alone with my own thoughts. I realized that I was holding my breath. So I tried to just breathe. There was nothing I could do about my sense of confusion, so I tried to relax into it. (The operative word here is tried.) 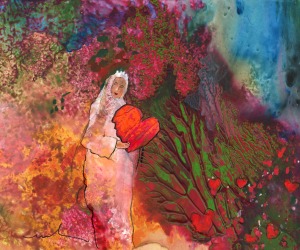 As I flipped through my tiny note book, I came across this line in a poem by Pamela Wilson: “Not knowing, even confusion, when met, reveals itself as wisdom in its potentiality, pure intelligence.” The poem was from a workshop by Johanna Royo on Heart-Centered Living during a one-day conference, Healing the World through Art, at the Georgia Museum of Art. Johanna described an experience of deep depression and loneliness in her life which led her to her practice of Heart-Centered Living. She said that at the very worst moment, she sat on the floor of her kitchen and it seemed that a huge black hole opened up. And then, instead of resisting it, she fell into it. And came out laughing. She realized that was the resistance and fear that were keeping her stuck.

Sitting there in Earth Fare, I saw an old friend I hadn’t seen in a while.  We chatted, talking about family, when she asked about my mother. She had known and loved my parents for a long time. Not only that, her husband had dementia for twenty years, a fact I had forgotten.  As I described my grief and fears, she nodded with understanding. It was a relief to talk about it with someone who didn’t shy away from the reality I was facing. She gave me good practical advice, and she also described the unexpected gifts that came from his illness. She said that over the course of his illness, he became much more affectionate. They shared an intimacy that in some ways was because of the illness. She described their last anniversary, which was celebrated in the hospital. Because the illness had made him blind, she had to describe the pureed food she was feeding him. They laughed about how when they married they never could have imagined celebrating their anniversary in such a way. She also described how, at the very end, when they thought nothing could reach him, a nurse singing a German folk song caused him to “wake up” and sing along with her in German. It was an unexpected gift of having him back, however briefly.

In a way I could never have orchestrated, I talked with the very person I needed to talk with that day. I left the store feeling lighter, clearer, and less afraid.

Note to readers: I have not posted since January. It was in January that my life felt upended—we had just inaugurated a man I feel is unfit to be president, my mother’s memory issues intensified, and I was under tremendous pressure to sell my book—which meant acquiring a whole new set of skills. My body protested. I am feeling on a more even keel now, and plan to post more frequently.